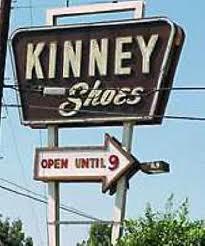 The other day, I was driving on Story Road in east San Jose reflecting on what influenced me to seek out leadership roles at work and in the community.  For starters, I’ve always been fascinated with great leaders.  When I was a kid, I would ride my bike to the county library and check out books about U.S. presidents and WWII generals.  After college, I began gobbling up biographies on Washington, Lincoln, Churchill, LBJ, and others.

Throughout my career, I’ve had the opportunity to participate in leadership programs that opened my eyes to a complex world.  I’ve sat transfixed in corporate seminars listening to words of wisdom from modern-day leaders like President Bill Clinton, General Colin Powell, and Oprah Winfrey.  From Washington to Winfrey, they all had the same qualities: they knew how to build great teams, create trust and loyalty with those around them, and inspire others to greatness.

As I drove by the old Kinney Shoes store on Story Road, it suddenly it hit me that it was there, where I had a part-time job during my high school days, that I learned my first lessons in leadership.  Kinney’s was an institution in east San Jose throughout the 1970s and 80s.  Everybody bought shoes there.  During the last days of summer just before school started, the store was like Grand Central Station at rush hour.  Suede wallabies, Mary Janes, and NBA “tennies” (Chuck Taylor knock-offs) flew off the shelves.

The part-time sales team was a diverse group of east side kids from Latino, Black, White, and Filipino families.  The leader of the crew was the store manager, an African American son of a soldier in his early 30s named Bob Williams.  Looking back on that experience, I realized that Bob was a true leader in the classic sense.  He carefully assembled an effective team, created a work environment that felt more like family than a part-time job, and transformed a bunch of east side teenagers into a shoe-selling machine.

Bob knew what he wanted when he hired people for part-time sales positions.  He put together a team of teenagers who came from hard-working families, participated in high school sports, and demonstrated leadership skills.  Billy Ham, my classmate and baseball teammate at James Lick High School, introduced me to Bob.  At the brief job interview I’ll never forget, Bob asked about my family, what sports I played, and if I was in the starting lineup.  Seemingly satisfied with my answers, he hired me on the spot.

While it was clear that we were there to sell shoes, Bob showed a genuine interest in our family and school life.  From time to time, Bob would invite us to his house for a barbecue where we got to know his wife Tina and son Bobby, played basketball in the driveway and two-hand touch football on the street.  These types of activities solidified us as a team.  It wouldn’t be unusual to see one of us spend a few hours just hanging out at the store on our day off.  Many of my co-workers became life-long friends.

We were a lively bunch that appeared, at first glance, to be undisciplined.  Bob had the rare ability to read people to determine what inspires them to achieve, a quality that distinguishes a leader from a mere manager.  Knowing that athletes loved to compete, he made a competition out of everything.  I still laugh thinking about us, in shirts and ties, playing Wiffle ball, running races, and duck walking in the parking lot.  All it would take was a challenge from Bob to see us run across the street to get a phone number from a girl sitting at the bus stop.  So when Bob declared a sales contest on back-to-school weekend, the race was on to see who could sell the most shoes, socks, purses, nylons, purses, and shoe cleaners.

Today when I think of Kinney’s, I always remember the friends, the contests, and good times.  I laugh reliving the mischief caused by a group of rambunctious teenagers from working-class families with a few dollars in their pockets from selling shoes.  Now I’ve also come to see Kinney’s as the starting point of my amazing journey through the world of leadership.  Those of us who had the privilege of working there during the late 70s and early 80s unwittingly got an education in leadership from a true master.  Right here in east San Jose.  Thanks Bob!